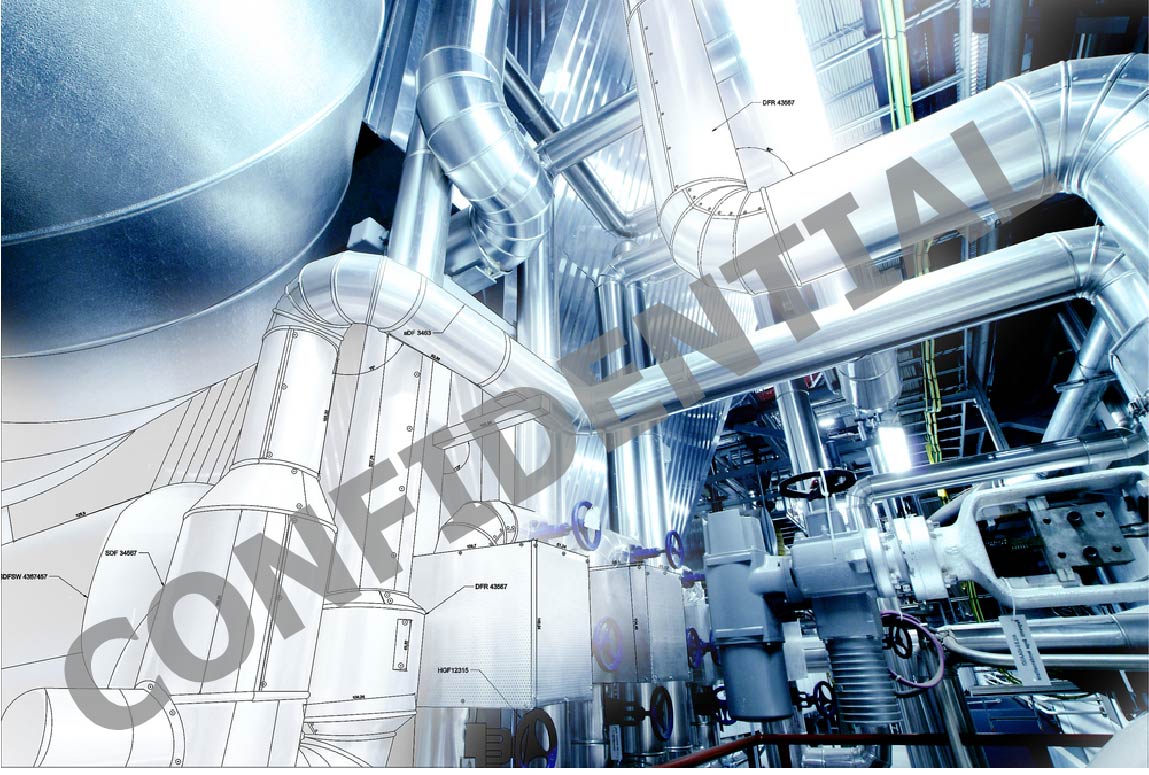 Local to our west coast presence, Cyma Builders & Construction Managers completed a $500,000 Oven Room construction project for a confidential Fortune 500 Pharmaceutical firm in Vacaville, California. During this job, which consisted of 500 SQ.FT. of work and a very aggressive timeline, the client required renovation of this existing manufacturing space.

The facility owned existing ovens to cure the product; however, they had been walled off to create additional space from previous renovation. The ovens were opened back up to the existing space and two new rooms were created – a new room for the ovens as well as a transitional room from the existing space to the oven room to serve as an airlock. After years of neglect, the oven needed a complete electrical and mechanical overhaul. All the electrical, HMI and chart recorder panels were refurbished and the existing air handling units and ductwork were tested for leaks as well as received new inline HEPA filters.

In addition, new terminal HEPA filters, LED lighting, stainless steel sliding doors, and epoxy flooring were installed in the two new rooms. Due to the strict timeline, the equipment was expedited and construction activities had to be uniquely phased to meet the deadline. The project was delivered on time and under budget to meet the client’s schedule.

May 20, 2016: Cyma Builders & Construction Managers Superintendents and Project Managers get involved with a Lean Construction boot camp. Once the training has concluded, all who attended will 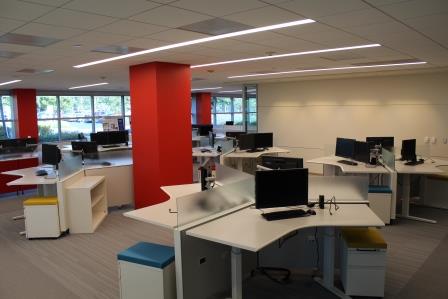 The 4600 Suite Office Renovations at 3210 Merryfield Row in La Jolla, California consisted of a complete overhaul to 15,000 SF of existing office space in their existing R&D wing to serve as the new executive office space for global directors of research and development for this Fortune 500 Pharmaceutical company.

The work was phased over two separate phases to allow for a staged occupancy and to minimize the amount of temporary placement facilities for existing employees. The new floor plans were designed and constructed to achieve a more open and collaborative work environment with the installation of many teaming and huddle rooms, small conference rooms, and open area media centers. Finishes in general were extremely high end with new woven vinyl floor coverings, fabric panel wall systems, stone flooring, porcelain tile accent walls, and stone/granite mill work. In addition, a new multipurpose training center was also constructed for large conferencing capabilities. The existing MEP systems were reused to the greatest extent possible, with minor modification of branch duct work and redistribution of electrical and tele/data to new office/workstation locations.

Cyma Builders has recently turned over the office and warehouse portions of a new facility expansion for a Pharmaceutical company in Wilmington, DE, with the manufacturing portion schedule for completion in Q1 2016.  Click here to read more! 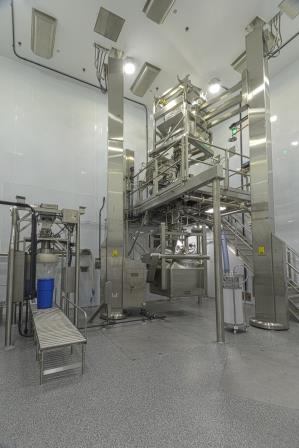 Cyma Builders was selected as the construction manager by this Pharmaceutical company to implement their Capacity Expansion Masterplan. The project was driven by spatial constraint of multiple programs throughout the site, including offices, warehouse and manufacturing (not pictured). The project was design to accommodate the additional needs of all three spaces within a single building addition.

The overall project consisted of constructing a new 17,000 SF pre-engineered building structure to accommodate the new program, which was apportioned 3,500 SF office, 3,500 SF manufacturing and 10,000 SF warehouse. The project commenced with an expansive pile driving effort, which was required due to poor soil conditions and adjacency to the river, followed by concrete mat slab construction. A 2,500 SF modular Vault was then delivered and erected onsite to accommodate controlled substance storage capacity requirements. The pre-engineered metal building was subsequently delivered to site and full assembled in the field around the Vault. The design of the building was done in conjunction with Cyma’s PEMB Division and Nucor. The structure had two sections, a lower roof area to accommodate the offices and an elevated one to accommodate the manufacturing and warehouse programs. All equipment loads were coordinated heavily during the design phase so the building purchase could be expedited and comply with the critical path.

The building erection was proceeded by receipt and rigging of major rooftop HVAC equipment. The office area was supported by a new 10,000 CFM packaged, DX AHU, while the manufacturing area was served by a 27,500 CFM custom Haakon AHU, inclusive of split condensing unit and heat pipe for energy recovery from the exhaust stream. Both units were installed on the roof over the office area, with the manufacturing system ducted over to the high-bay portion of the structure. A 16,000 CFM vertical air rotation unit was utilized for the warehouse and installed on an interior pad. Office construction included a new conference room, workstations and enclosed offices. The warehouse was design to accommodate 192 total pallet positions, with the Vault design to house an additional 192. All racking was installed to achieve this and a new epoxy coating installed across the warehouse floor.

The manufacturing area was designed to accommodate two (2) new Finishing Suites, only one of which was constructed and built out as part of the project. Additional support spaces included a Wash Room and Weigh/Dispense/Re-Pack Area. The proposed Finishing Suite included installation of existing mill and sifter equipment for bulk API processing; however, a new stack-up was required in order to accommodate their reuse. Cyma Builders led the procurement effort to purchase the new stack-up complete with new IBC’s, post lift, static butterfly valves, blender, and pack out equipment surrounded by a multi-tier stainless steel mezzanine. Additional process equipment purchases were also coordinated to accommodate the program including roller conveyors and floor scales.

Cyma Builders has successfully completed construction on a 23,000 SF DEA Vault facility for a client in Huntsville, AL to expand their existing Distribution Center. The project was originally chartered to support additional storage capacity needs in order to meet DEA requirements. Cyma executed the project utilizing an EPCM model, to manage all aspects of project design, procurement, construction and commissioning. The project was kicked off at a concept level on February 2, 2015 and receive final Certificate of Occupancy at the end of September. The team at Cyma utilized lean methodologies in conjunction with our subcontractors to expedite the project and manage parallel critical paths simultaneously. In recognition of such effort by M&D Mechanical on the project, the North Alabama Association of Builders and Contractor has recognized the project for Excellence in Construction. The completion of this project on time and under budget is a testament to the hard work of the individuals and partner firms, who remained focused on successful delivery throughout. 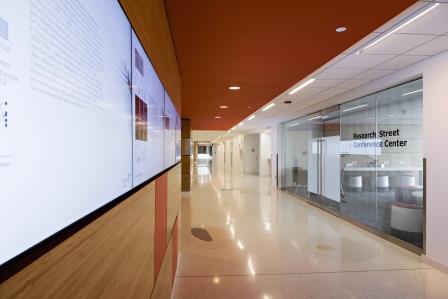 Cyma Builders was selected by this Fortune 500 Pharmaceutical company to renovate the main corridor at their R&D facility in Spring House, PA, which serves as the spine connecting all buildings onsite. The project entailed high-end architectural, branding and AV upgrades representative of the site’s science based functions and corporate culture. The project was logistically constrained due to the fact that the corridor needed to remain active during normal business hours. As such, the team at Cyma developed a plan to phase the work and conduct all construction activities during off hours. Essential to this strategy was ensuring any work performed during a shift could be made safe for employee traffic the next business day. Upgrade included installation of high-end mill work feature wall, new ceilings and glass storefront to segregate adjacent areas. Renovations were also performed at the adjacent conference center to match the new Research Street environment. Additionally, a new terrazzo floor was installed throughout the renovated area, inclusive of custom metal inserts illustrative DNA and cells. All work was performed on time, within budget and without impact to daily site operations. 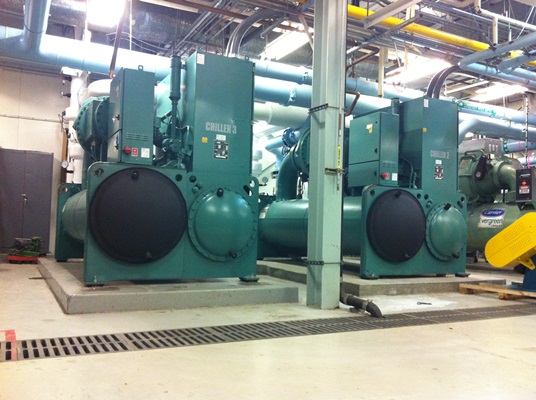 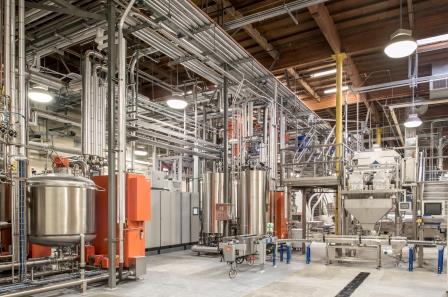 The Mogul #3 Installation consisted of three major areas of new construction: installation of a new production line, exterior equipment installation and interior equipment installation and infrastructure upgrades. All three areas were constructed while the existing facility remained in operation with no disruption except for an essential shutdown.  A 36 hour site wide shutdown was necessary to perform load shedding from existing switchboards to newly furnished and installed switchboards to feed the new production line.  The shutdown required coordination between two other tenants at the facility and tie-ins to existing product lines, compressed air, clean steam, natural gas and cooling water.  New air compressors, dryers, filters and receiver tanks were installed as part of the facility upgrades.

New underground plumbing and footings were installed inside an existing warehouse space to support the new production line. A stainless steel platform was erected to house new production and packaging equipment. The receiving, rigging and setting of equipment purchased from vendors in the Netherlands and Australia was managed by Cyma and coordinated with onsite technicians. The equipment was carefully installed and precisely leveled according to the manufacturers requirements. A total of seven prefabricated, environmentally controlled rooms were constructed, each complete with an automated track system that communicated with the rest of the production equipment. Several layers of intricate process piping served the new equipment and an array of interconnecting piping, conduit, ductwork and controls were heavily coordinating to achieve a fully functional system while meeting the end users spatial and sanitary requirements. Product conveying lines, inspection stations and packaging lines were also installed as part of the final stages of the process.

New exterior equipment pads were required for new boilers, cooling tower, air handling unit, storage silo and associated equipment to meet the demands of the new production line. All of the equipment was received, rigged, set and installed by Cyma. Power and utilities to this equipment required structural supports secured to the side of the existing facility and ran approximately 300 ft. from the existing boiler room to the new equipment pad.