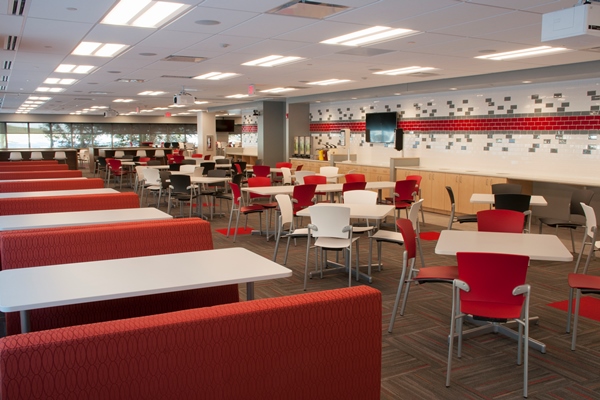 The Animas/Life Scan Chesterbrook Building 965 Renovations was a multi-faceted project with the overall goal of upgrading multiple components of the existing building workspace and employee areas. From the project outset, Cyma Builders worked closely with the design team to develop a project scope that worked within an available budget. Approximately 25,000 SF of the 3 story, 125,000 SF building was renovated, without any impact to the active office facility. Numerous portions of the building were upgraded for a variety of workplace improvement, including the Cafeteria, Server, Training Centers, Fitness Center, Touchdown Space, Conference Rooms, Kitchenettes, Stairwells, Lobby and Mobility Center. The project was constructed under multiple phases, all of which were turned over on time and within budget.

Cyma Builders & Construction Managers was selected by DPT Laboratories for a multi-component project to build a new Wash Prep Suite along with a Critical Utility Plant in support of ongoing operations and future expansion plans.

The Equipment Wash Prep Suite ($5,250,000.00/5,000 SF) involved the construction of a new wash room to support current and future filling operations as well as the construction of new utilities to support the future expansion needs of the facility. The wash room was constructed using the AES modular clean room system, and includes Grade C and D spaces. A new 13,500 CFM AHU was installed on roof level dunnage, along with all associated supply/seturn distribution and terminal HEPA filtration. Process utility distribution include new clean steam and WFI piping to points of use and washroom equipment connections. The challenges in constructing the suite involved installing a large amount of ductwork, re-circulation fans, and other HVAC & Process utilities in a mechanical space above the suite while maintaining a clearly designated walking path on the ceiling for maintenance and testing access. This effort required extensive coordination between the subcontractor, Cyma, architect and engineer to ensure an acceptable end product. Cyma also tied the new wash suite into an existing production suite during a compressed shutdown schedule to accommodate the client’s need to maintain production.

The new wash suite required the installation of several new pieces of equipment to allow for the proper operation of the room. Two Steris parts washers and Belimed Autoclaves were installed in the suite and integrated into the AES wall system and integrated with stainless steel closure panels.

The Critical Utility Infrastructure ($3,600,000/4,000 SF) upgrades to the production facility were extensive during the Equipment Prep & Wash project. Cyma performed a complete upgrade of two of the existing electrical services during this project, which served almost all of the major production and storage areas at the plant. This shutdown required an extensive, coordinated shutdown that was performed over a weekend. Cyma and the client worked together to ensure that all critical areas were supported with emergency power, and to make sure that the transfer of the loads from the old switchboards to the new substations were performed without issue.

Other infrastructure upgrades include major modifications to the plant’s water for injection (WFI) capabilities. A new 8,000 gallon Feldmeier holding tank was installed, along with a custom distribution skid to support the new WFI loop that was installed as part of this project as well as the existing loop that was currently in service. Cyma installed a new MECO Vapor Compression Still and Pretreatment system to perform the WFI generation on this new system. In addition to this infrastructure, Cyma also purchased and installed a new Digital Analysis Waste Neutralization system to treat any waste before releasing it to the township drainage system. All work was performed strategically to avoid impact to any active manufacturing operations. Architectural room construction followed equipment installation to define the boundaries of the newly complete Critical Utility Plant. 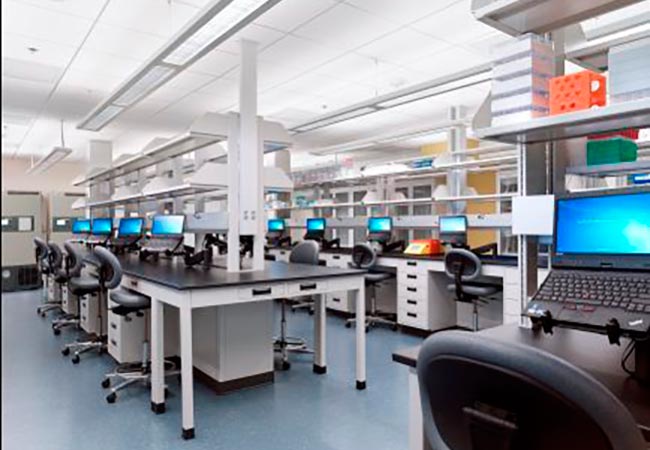 Cyma Builders was selected as the construction manager for a programmatic effort to relocate an existing R&D facility located in Radnor, PA to Malvern, PA and Spring House, PA. The Malvern renovations consisted of a complete renovation to 35,000 SF of an existing Warehouse and Office Building to construct new Analytical Labs, Formulations Labs, API Bioreactor Suites, Wash Room Facility, API Freezer Farm, Hazardous Storage Space, Mechanical Room, and Office Space, as well as the addition of 16,500 SF of new asphalt parking lot space. Existing cryofreezer farms in the existing building footprint were maintained and operation throughout the duration of the project. A separate facility was renovated on the Malvern Campus to relocate the disrupted warehouse functions. The overall project was put under an aggressive schedule in order to allow for vacancy of the Radnor facility without any lease extensions.

Major infrastructure upgrades for the process and plumbing systems of the project consisted of the pre-purchase and installation of a new duplex 200ACFM vacuum pump skid and liquid separator, packaged DI water mixing bed skid, softened water skid, vial washer, and glass washer assembly. New incoming domestic water, sanitary, and gas services were brought into the building from the existing utility company feeds outside of the building footprint. Compressed air, carbon dioxide, oxygen, helium, and argon gases were distributed throughout the labs via cylinders and automatic change over manifolds. A new liquid nitrogen system was installed along with a vaporizer to serve as the building’s gaseous nitrogen system.

While the site currently had adequate capacity from the existing PECO service and existing generator set, the existing distribution infrastructure was undersized and needed to be replaced. Cyma installed a new 3000A main switchboard, 800A motor control center, 400A ATS, 200A ATS, 225KVA UPS, 600A motor control center, and four 800A distribution panels. A temporary generator was utilized during all major shutdowns in order to keep the existing cryofreezer farms and their associated MEP infrastructure operational at all times.

The Spring House renovations included 10,000 SF of laboratory renovation to accommodate the relocated program. Additionally, all proposed renovation areas were occupied, requiring enabling moves to other spaces throughout B42. All work was heavily coordinated with end user groups to minimize down time and facilitate the moves. Existing building utility systems were leverage for all plumbing and HVAC upgrades; however, all utility shutdowns were closely coordinated to minimize impact to daily business function. To support emergency power requirements, a new 750 kW emergency generator was install exterior to the building with fuel oil connection hard piped to the onsite storage building. New feeders were brought in to support the new emergency loads, as well as back feed existing building emergency services.

All critical work in both Malvern and Spring House was completed at the conclusion of 2013. 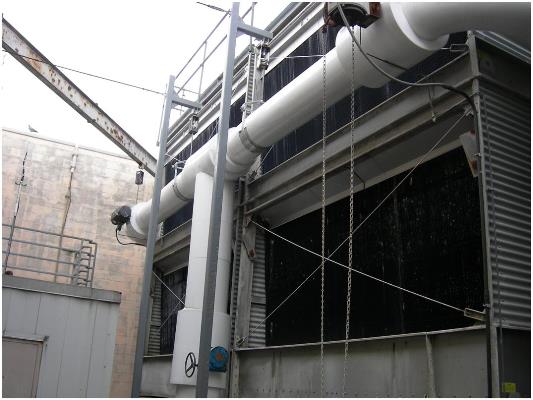 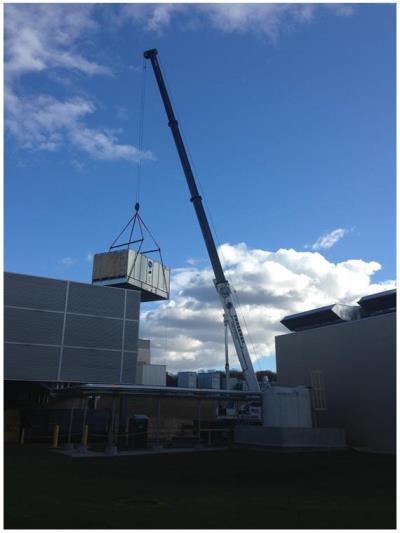 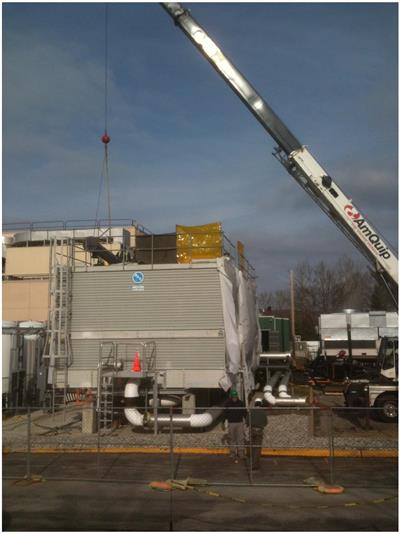 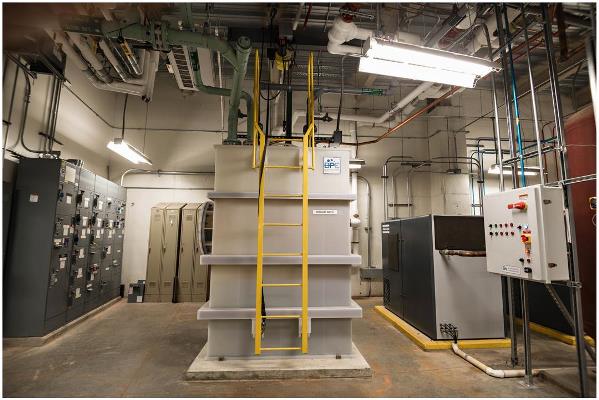 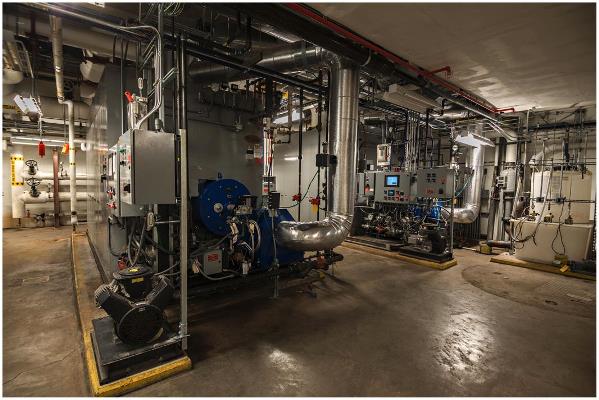 The DPT Laboratories Washroom Prep Suite was a multi-faceted project with the overall goal of constructing a new wash room to support current and future filling operations as well as the construction of new utilities to support the future expansion needs of the facility. For more details and project photographs, check out the project page at the link below:

The Animas/Life Scan Chesterbrook Building 965 Renovations was a multi-faceted project with the overall goal of upgrading multiple components of the existing building workspace and employee areas. For more details and project photographs, check out the project page at the link below: